LONG BEACH—New construction at campuses within the Long Beach Unified School District will be handled for years to come by highly trained and skilled organized labor under a Community Workforce Agreement that was recently approved by the district’s Board of Education.

The workforce agreement, which the five-member school board approved by unanimous vote on Jan. 22, will provide many Tradesmen and women the opportunity to work in their hometown and at schools where they or their families have been students.

Of the more than 100 members of Building Trades local affiliated unions who attended the school board meeting to express support for the agreement, a clear majority were Long Beach residents, with a substantial number having been born and raised in the city. 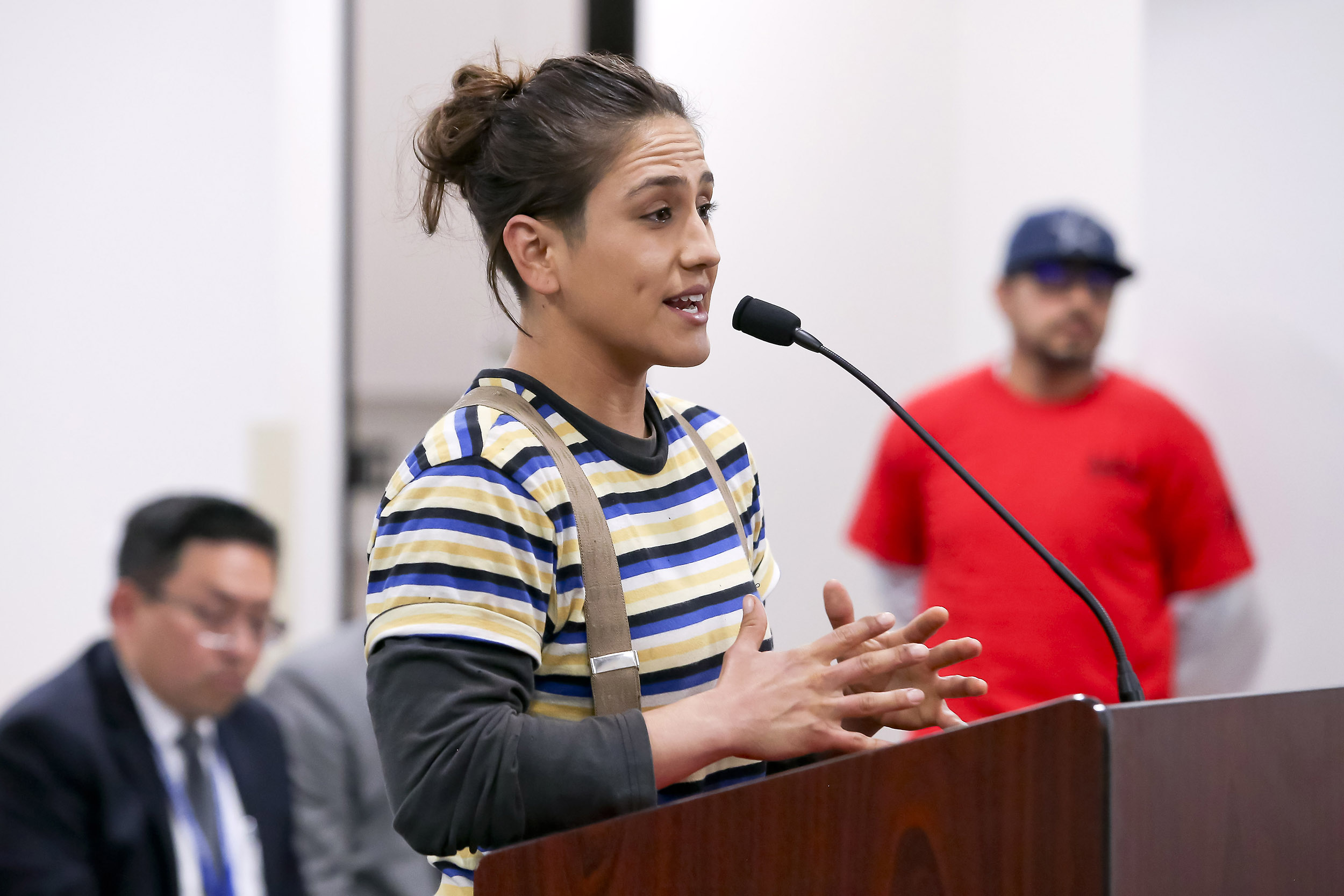 “It gives us an opportunity to work close to home rather than drive hours away and work everywhere else but home,” he said of the CWA. “It provides more work for our local brothers and sisters that are here. More work for everybody.”

Keeping Work in the City

“I think it’s pretty cool,” Long Beach native Fidel Becerra of Laborers Local 1309 said of the agreement’s passage. “It’ll be pretty nice to be a part of it.”

“You work where you were raised—that’s tight,” added Victor Velasquez, also of Local 1309, and a local resident. “You’re always home early, you save on gas and you’re close by to everything you know.”

Long Beach native Daniel Tauch, who’s been an IBEW Local 11 member for almost five years, said that one thing that really appeals to him is not having a long commute.

“You know how LA traffic is,” he explained. “Since I’m a local resident, I want to work in my city, get paid in my city and keep the money in my city. It’s all about Long Beach, that’s what it is.”

He also said that pride—both in his city and in organized labor—is part of the reason that he’s so excited about the CWA. 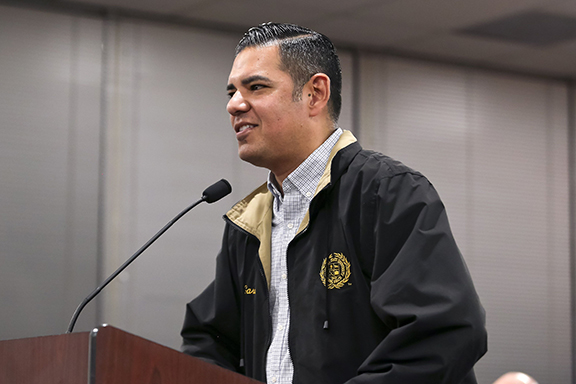 “If something is to be built, I want it to be built the correct way, by trained professionals who know what they’re doing,” he said. “Us being union members, we are highly trained with safety and quality work.”

Karissa Reyes, a second-year apprentice with Local 433 who was also born and raised in Long Beach, agreed. She is a graduate of the Building Trades-affiliated apprenticeship-readiness program at Long Beach City College.

“It would be a blessing to show my family and friends in my city what I’ve done, and be able to go by and see it all the time,” she said.

The agreement calls for about $450 million worth of construction projects to take place over a five-year period, according to LBUSD Superintendent Christopher J. Steinhauser, and will likely add more projects. The CWA also includes provisions for educating and assisting students within the school district who show an interest in the construction field.

“We have a solid agreement that, number one, the students are going to benefit from,” Los Angeles/Orange Counties Building and Construction Trades Council Representative Chris Hannan explained to the school board just prior to the vote. “You’re going to have a full-time apprenticeship career counselor funded by the Building Trades, you’re going to have a scholarship program backed by the Building Trades, so that there will be no financial obstacle for one of your students to get in one of our apprenticeship programs.” 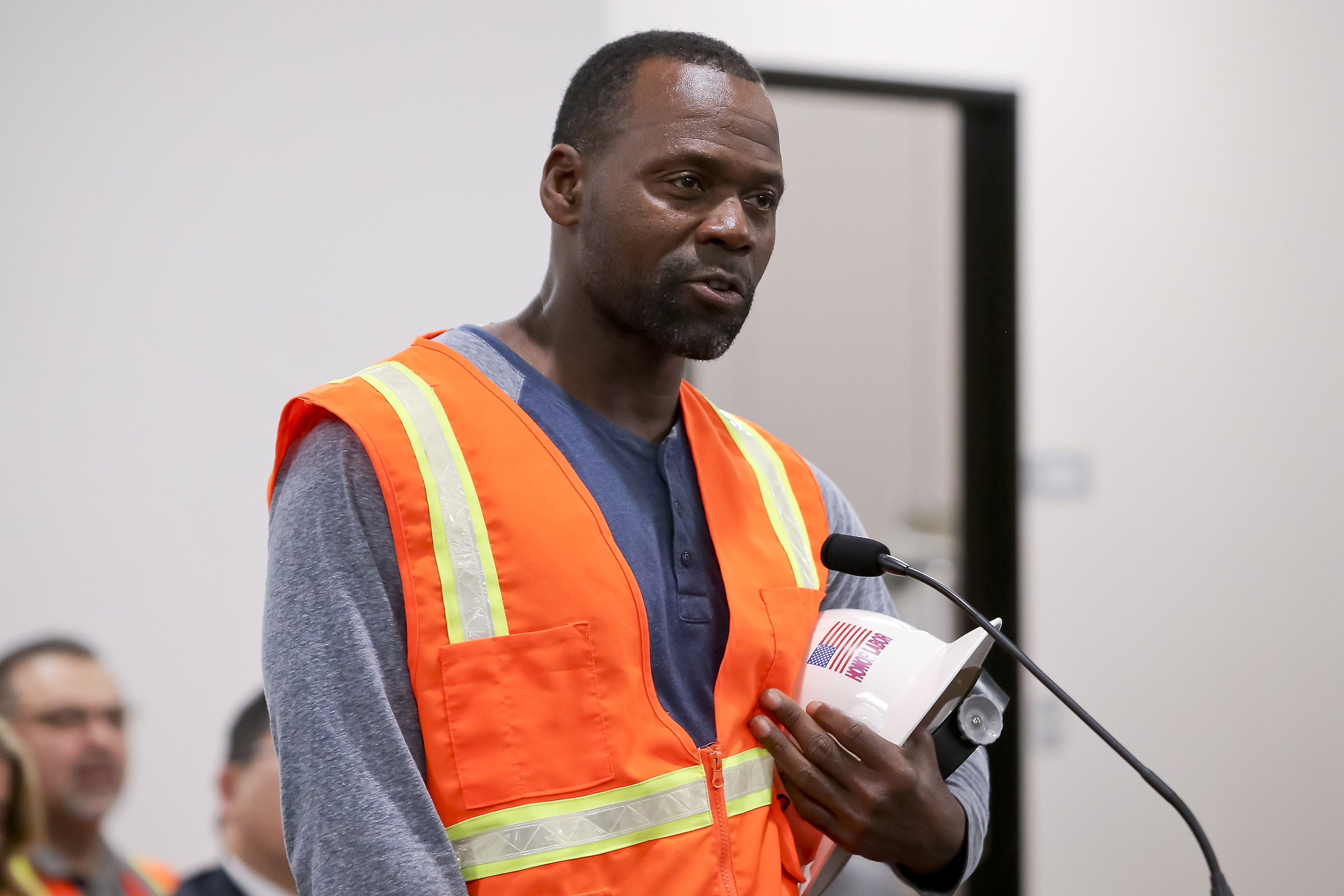 “I always wanted to be a union Electrician and Local 11, they provided a great opportunity for a career for me,” testifies Long Beach resident and military veteran Keith Franklin, apprentice with IBEW Local 11.

Also among those addressing the board was Long Beach Mayor Robert Garcia, who fully endorsed the CWA.

“You’ve all been working hard

with our partners in the Trades, and it’s really appreciated,” he said. “Our school district is a leader when it comes to construction.”

“What I find really important about Project Labor Agreements is yes, they can sometimes be a little more complex, and sometimes there are additional measures to meet, but you always get, in my opinion, better work. You get work that has been vetted, and most importantly, the men and women who are on those jobs are given the dignity of good pay, benefits and the ability to take care of their families,” Garcia continued. “These projects help and support working families across Long Beach and across the region.”

Journeyman Robert Diaz of IBEW Local 11 lives in Long Beach, and his son attends a LBUSD school. Diaz gave a personal account of being a graduate of the non-union Associated Builders and Contractors’ electrical apprenticeship program before joining Local 11. He said the ABC program was inadequate.

“Upon graduating that program, I was left to myself. I was left on my own, there was no safety net. I was left on my own to find my own employment, negotiate my own wages, pay for my own insurance and deal with poor company policies. That’s what led me to the International Brotherhood of Electrical Workers. I immediately took advantage of the Electrical Training Institute, where I’ve learned skills that far exceeded what my apprenticeship gave me. 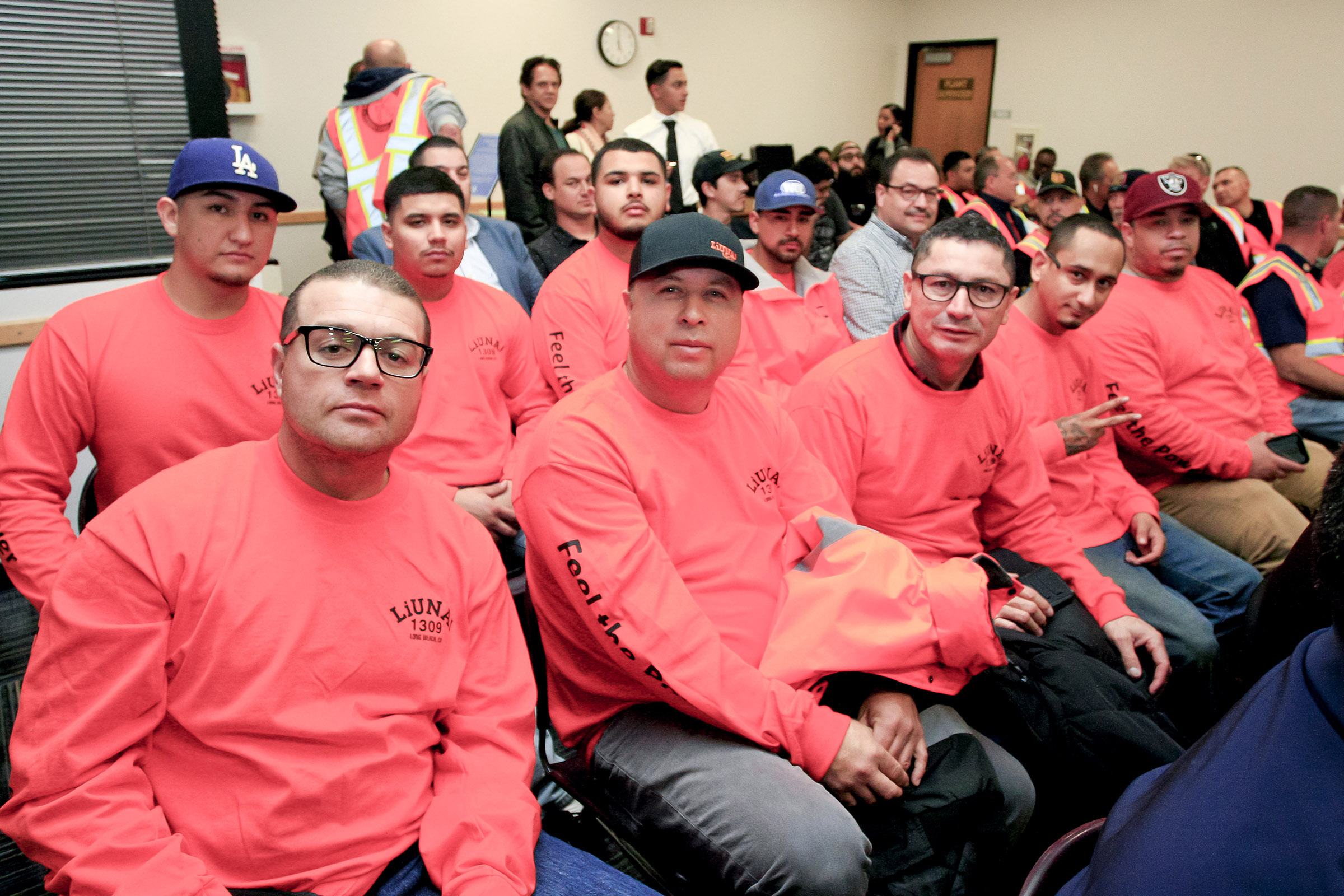 “It also gave me the wages that made owning a home here in Long Beach a reality. I have health insurance, where I no longer have to fear doctor visits or dental visits, or medical bills. I have a retirement where I can rest assured that when I grow old, the burden of that will not be left on my son. But most important is the brotherhood. These men and women that work beside me, it’s not just a Trade, it’s not just a job. They truly are an extension of my family.

“I hope the board makes the right decision on this agreement, as I wish that these young tradesmen make the right choice and choose a union apprenticeship,” Diaz said.

Pathways to a Career

Board members praised the CWA. “It’s a unique agreement and it puts students and communities first,” said Vice President Juan Benitez. “Thousands of students will graduate from our schools, gain an apprenticeship and some high-level 21st-century skills, and come back and work at a school in our district, buy a home in our district, potentially raise a family in our district and spend their money in our local area.”

Board member Megan Kerr appreciated that so many local residents showed up to support the CWA. “To have some of our alumni here to speak in favor of this was a really important symbol,” she said. “To all of you who came out to speak to us tonight, we’re so grateful for your voice.”

“What I’m hearing tonight is very encouraging,” Board President Dr. Felton Williams said just prior to the vote. “I’m so pleased that we’ve made this a model program. Now, let’s move to ratify this, folks.” 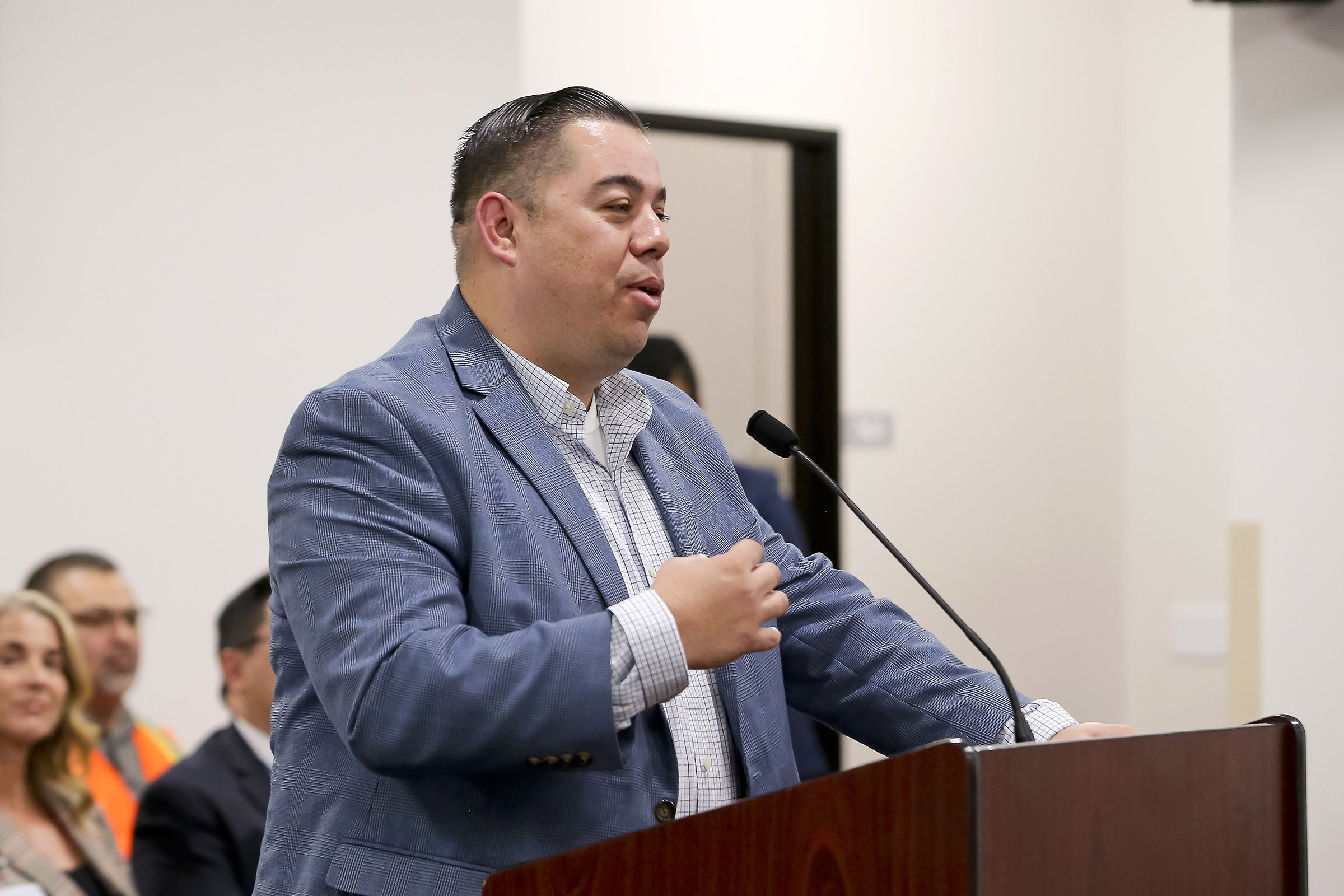 Tommy Faavae, an organizer with IBEW Local 11, said the CWA was a long time coming.

“I’ve been focused on Long Beach Unified the past 13, 14 years as an organizer, and Long Beach Unified School District has been a tough one to crack when it comes to garnering votes at the board level to advocate for Project Labor Agreements,” he said. “So at this juncture, it’s a historical time right now for us.”

He mentioned that the Building Trades Council already has PLAs in place with some the city’s other biggest employers: the City of Long Beach, the Port of Long Beach and Long Beach City College.

“When it comes to creation of jobs, you’re talking about a huge impact,” he said. “And for students that attend Long Beach Unified, they can be given opportunities to come into good Trade unions, good apprenticeship programs, because now we’re partnering with the school district to create these pathways to a good middle-class career.”