SAN JUAN CAPISTRANO—The kickoff of south Orange County’s first freeway construction project in more than a decade was celebrated Jan. 29 with a gathering of more than 100 transportation, community and business leaders in San Juan Capistrano. The crack of a whip split a banner held by officials, symbolizing the latest effort to whip traffic snarls.

“I am pleased to see this much-anticipated project get under way and am looking forward to it bringing congestion relief to all who travel on the I-5 through south Orange County,” said Orange County Fifth District Supervisor Pat Bates. She also serves as a director of the Orange County Transportation Authority, which is sponsoring the project in partnership with CalTrans.

Hiring skilled construction workers is the next step to prepare for the $249 million project planned to reduce congestion on the I-5 freeway between San Juan Capistrano and San Clemente.

“This is a much-needed additional project that is funded in part by the extension of Measure M,” said Jim Adams, Orange County Representative for the Los Angeles/Orange Counties Building and Construction Trades Council. “It not only will create much-needed infrastructure jobs for the craft unions but it will help move traffic and goods in that area.”

The plan calls for a carpool lane that now ends at San Juan Creek in San Juan Capistrano to be extended to Avenido Pico in San Clemente.

In addition to adding a carpool lane in both directions over this approximately six-mile stretch of the I-5, the project will rebuild the Avenido Pico interchange, easing traffic flow by widening Avenido Pico beneath the freeway, widening the northbound onramp and adding freeway merging lanes.

About 20 percent of the cost of the project will be funded by Measure M, which Orange County voters passed in 1990 and renewed in 2006. Both the original measure, which established a half-cent sales tax for transportation improvements, and the Measure M2 renewal were strongly supported by Building Trades affiliated local union members, who walked door to door to get out the vote.

These prevailing wage jobs are welcomed by construction trades that have suffered from years of economic pain.

“It will hopefully bring a lot of jobs not only to my members but to all crafts in general,” said Adrian Esparza, Business Manager of Laborers Local 652, whose out-of-work list includes 147 journeymen and 16 apprentices. Some of them have been seeking employment for up to a year.

“These are good, long-lasting jobs,” Esparza said. By the size of the project he figured that it could provide work for some of his members for two to three years, and at peak construction it could employ a minimum of 80 to 125 Laborers.

Esparza said earlier in his career he was employed as a foreman for Shimmick. “It is a good company, a good outfit to work for,” he said.

Mickey Totten, a business agent for Operating Engineers Local 12, said Shimmick “will have to do demo and grading and paving and we will be involved in every phase of it.”
Totten said he expects mostly union workers will be hired because the requirement for the contractor to pay prevailing wages puts union labor on “a level playing field” with non-union labor.

Work for his members, Totten said, has picked up momentum over the last 18 months, spurred in large part by construction projects enabled by Measure M. He said the local’s District 7, which is based in Anaheim and covers Orange County, part of Long Beach and the Ports of Long Beach and Los Angeles, is the busiest Operating Engineers district in southern California.

The I-5 South Improvement Project is one of 13 freeway projects identified for funding from Measure M, said OCTA spokesman Joel Zlotnik. Collection of the Measure M2 sales tax began in 2011 and is expected to generate $15.5 billion over the measure’s 30-year lifespan. The previous Measure M raised $4 billion. 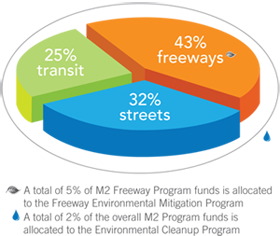 OCTA public communications manager Ted Nguyen said that without Measure M money from local taxpayers, OCTA would not have been able to secure the state and federal funding to complete financing of the I-5 improvements between San Juan Capistrano and San Clemente.

The project, Nguyen said, “represents the OCTA’s commitment to our taxpayers to deliver transportation improvements in south Orange County as promised by Measure M.”

Scheduled for completion in 2017, construction will proceed in three phases. Zlotnik said Shimmick, with a regional office in Irvine, was chosen as the general contractor for the first phase of freeway expansion between San Juan Creek Road and Pacific Coast Highway. Contractors have not yet been selected for the later two phases, he said.

“In the next several weeks the contractor will mobilize equipment and hire workers and personnel,” with heavy construction expected to start in April, Zlotnik said.