By a 4-2 vote, the council approved the sales agreement for the city to sell to SRB Management, a private company that promises to keep the Angels playing ball in Anaheim at least 30 more years; update or rebuild the 54-year-old stadium without taxpayer subsidies; and pave the way for commercial and residential development in the stadium neighborhood that lies within the city’s economically prized Platinum Triangle zone. 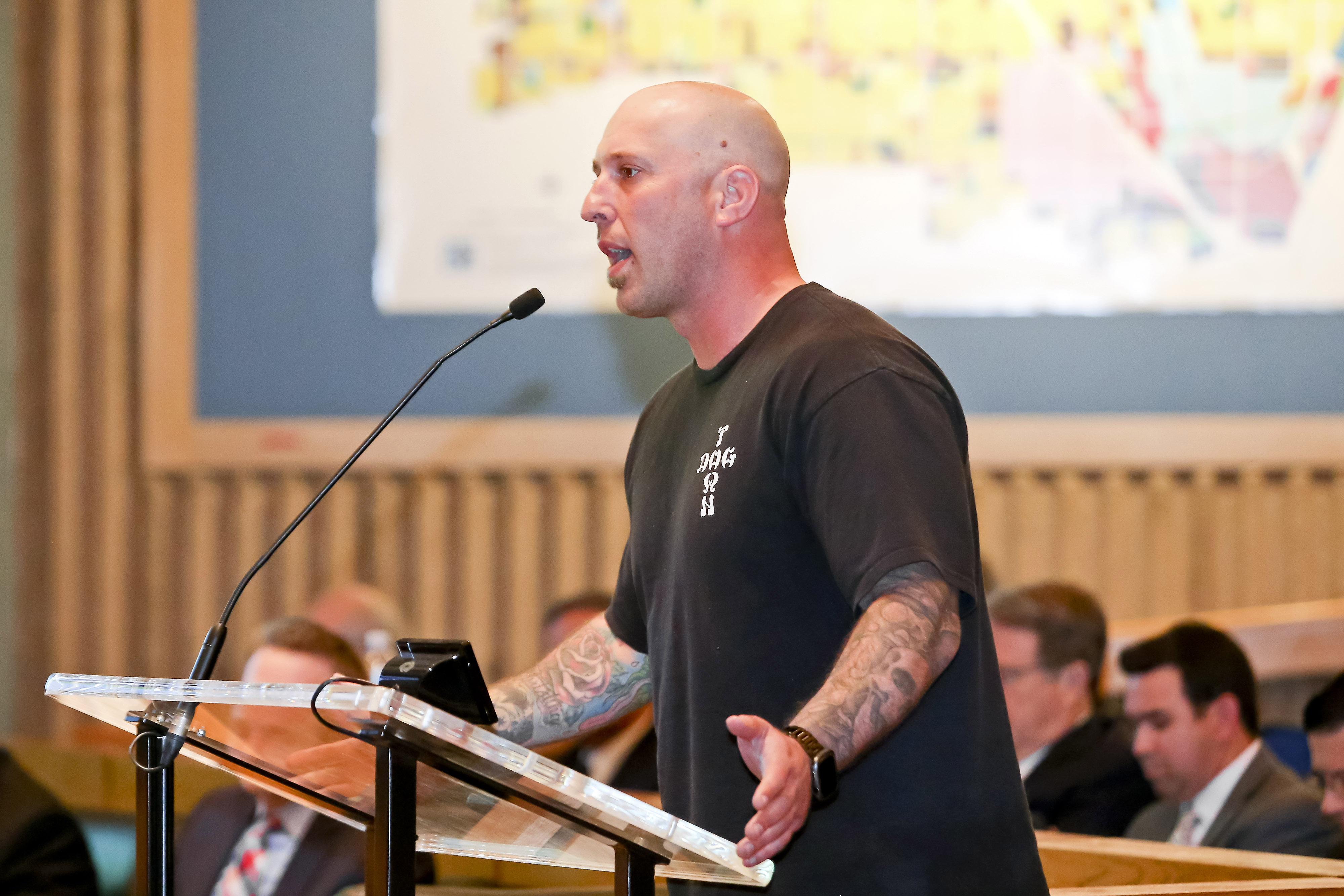 The timeline is long and ambitious. Construction of a new stadium or renovation of the existing one, plus mixed-use development that could involve homes, retail, restaurants and a hotel, will materialize by 2050.

Construction would likely start within five years on the site, which is 153 acres including the stadium. A city consultant report said that during a 15-year construction period, the stadium and mixed-use projects could generate 18,000 construction jobs representing $1.5 billion in wages.

Most important to the Building Trades, the city and SRB will determine what community benefits SRB will provide in its development, above what the city already mandates.

A Community Workforce Agreement with the Building Trades that would establish local and veteran hiring requirements for thousands of construction jobs is the top priority. 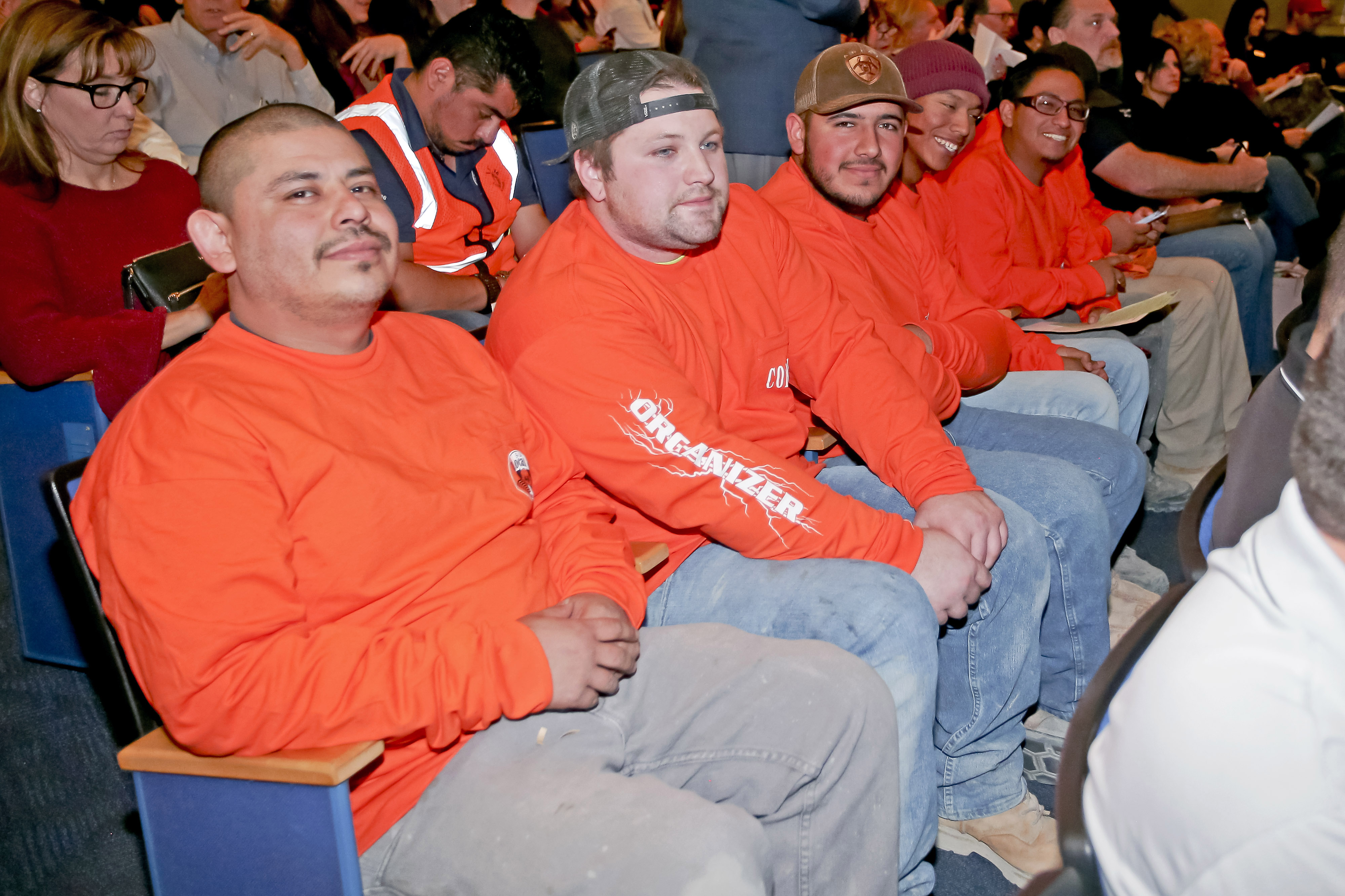 He said the City Council should “get down to business in negotiating the next step with the Angels and make sure you ask for a Community Workforce Agreement with local and veteran hiring programs at the top of your list of community benefits.

Medrano said the construction jobs expected from the stadium and surrounding development are “career opportunities for young men and women to have a path to the middle class through our joint labor-management apprenticeships.

Nothing We Can’t Build

“Our members are particularly good at building stadiums,” Medrano pointed out. “We built the new LAFC soccer stadium on time and under budget. We have 3,100 people working every day on the new football stadium in Inglewood. We do office towers and residential towers and hotels. There’s nothing we can’t build.”

Among the Building Trades apprentices who spoke at the council meeting was Antonio Barrios, a second-year apprentice with IBEW Local 441, who wore an Angels cap as he took the microphone. 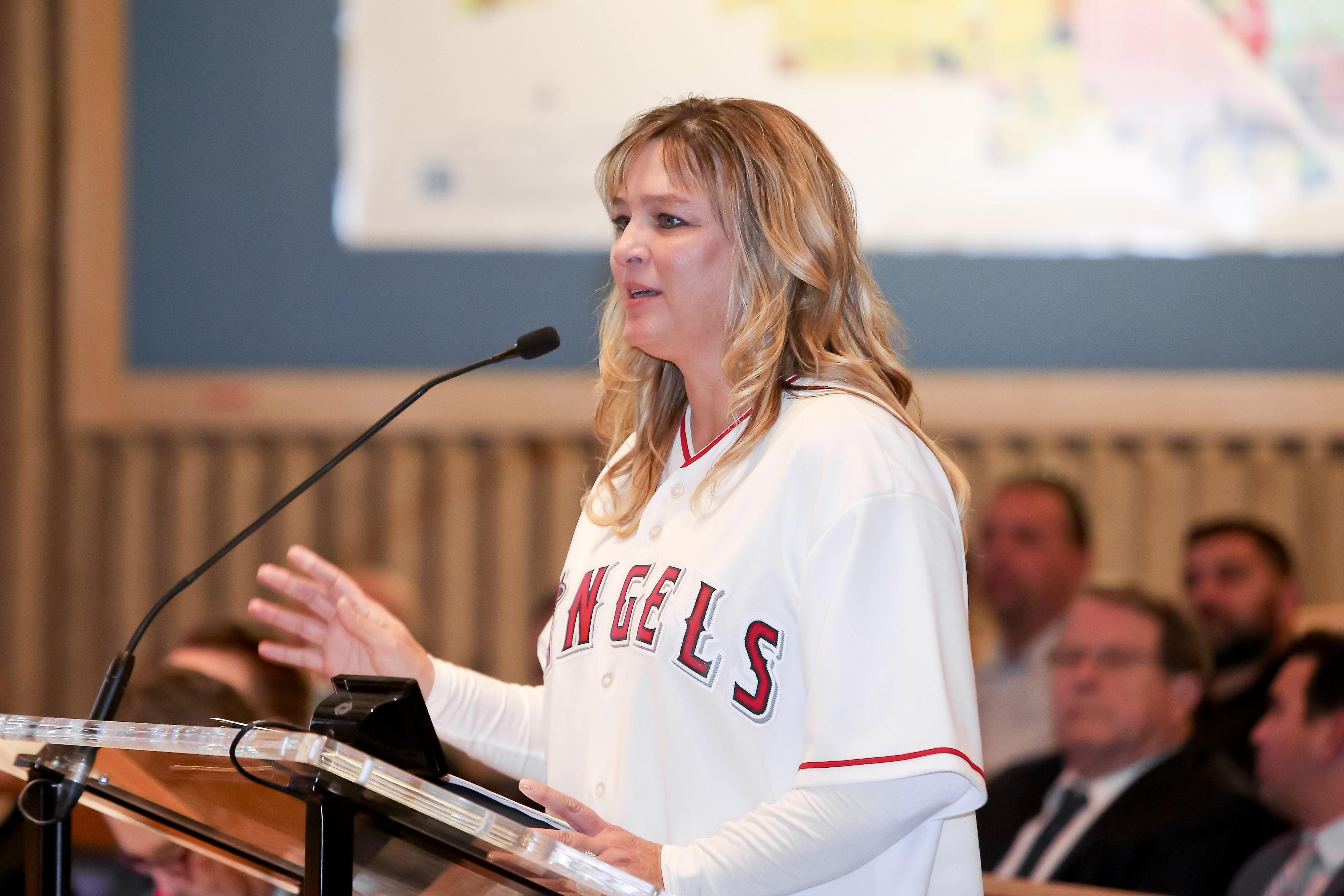 Barrios, a 26-year-old Anaheim native, said the multiple projects would “potentially keep our Orange County brothers and sisters occupied with work.” He said that “there wouldn’t be anything better than to get the opportunity to build and work in the same community that I was raised in.”

“The stadium would be a nice long job,” said Adam Elliott, 45, an organizer for UA Local 582 in Orange. “They won’t build a stadium nonunion. They can’t do it without the skilled workers the union provides.”

Jon Coulson, a field representative for Bricklayers & Tile Layers Local 4, brought six apprentices. He said some Bricklayer apprentices never had benefits or received overtime pay when they worked at nonunion jobs. Achieving Community Workforce Agreements, he said “helps everybody. It eliminates the underground economy of cash jobs and unscrupulous contractors.”

Some speakers also are eager for the Angels to remain in Anaheim.

“Baseball is an American institution and the Angels are an Orange County institution. We ask that you move forward,” said Sam Hurtado, business agent with SMART Local 105. 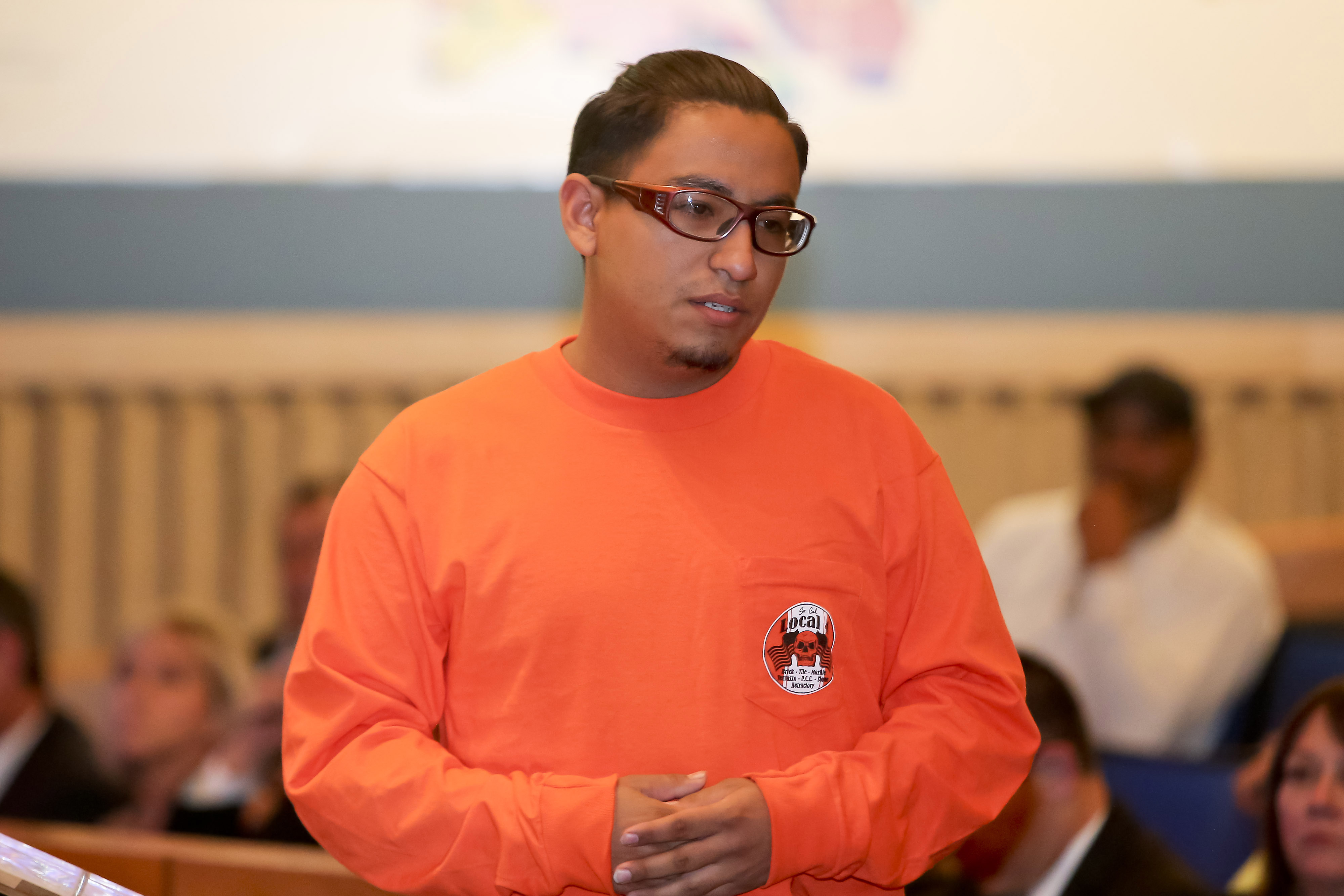 Brandon Rodriguez, an apprentice with Bricklayers & Tile Layers Local 4, is 23. “I am an example of those families who benefited from union work, and what I ask is to keep the construction work unionized,” he testified.

“First of all, I am an Angels fan,” said Robert Sage, a 39-year-old Army veteran and first-year apprentice with Iron Workers Local 433. Sage also wants more job opportunities closer to his home in Huntington Beach.

“In the last five years we have seen a dramatic uptick in the amount of workforce agreements in the city of Anaheim,” said Doug Mangione, representative of IBEW Local 441. “There is a Project Labor Agreement with the city of Anaheim and the Anaheim High School District, the Anaheim Elementary School District and the Westin Hotel.” He said a CWA on the SRB projects would be “another milestone.”

Paul Aroian, a 36-year-old instructor with the Iron Workers apprenticeship, said this was the third meeting he had attended that month in Anaheim with his apprentices to fight for Community Workforce Agreements.

Aroian, who bought a home since joining the union seven years ago, told the council, “The Iron Workers has changed my life.” He said Community Workforce Agreements “provide our apprentices a good career, a way for them to sustain themselves. More importantly, they also provide good conditions on the job site. An Iron Worker career is perilous…I want good, safe working conditions and good contractors out there.”

“This is a rare and remarkable opportunity for the people of Anaheim. It is a chance for our city to blaze a trail and set an example for other communities on how to leverage public assets for the greater good of the community,” said Todd Ament, President of the Anaheim Chamber of Commerce. 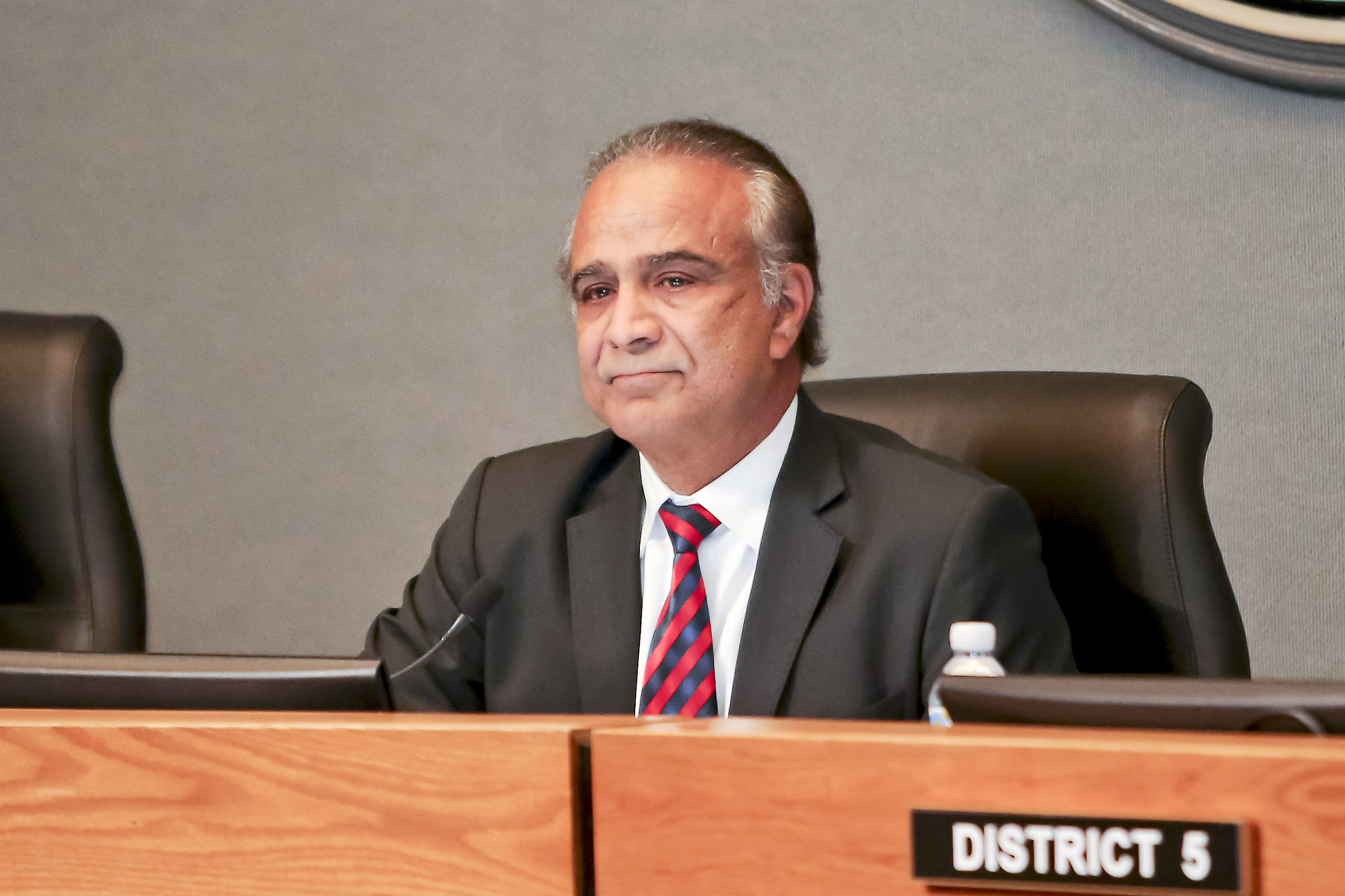 “It comes down to a simple question: Do we want to see baseball continue in Anaheim or not?” asks Mayor Harry Sidhu.

“I am here to support this vote to get this deal done,” said Ron Miller, Executive Secretary of the Building and Construction Trades Council. “It will bring money into the coffers of the city through development of all the property. We think this is a good deal and we want to see you go forward on it.”

Mayor Harry Sidhu, who represented the City Council in the sale negotiations, said the $325 million price the city is getting reflects the value of the land with a stadium and 12,500 parking spaces. The land might command a price of $475 million only if the stadium was razed to bare ground and the parking removed, according to city consultants.

“It comes down to a simple question: Do we want to see baseball continue in Anaheim or not?” Sidhu said.

Many Anaheim residents faulted city negotiators for not requiring the Angels to adopt the name of their host city. Mayor Pro-Tem Lucille Kring said the team has refused to do that. “It will never happen,” she said. 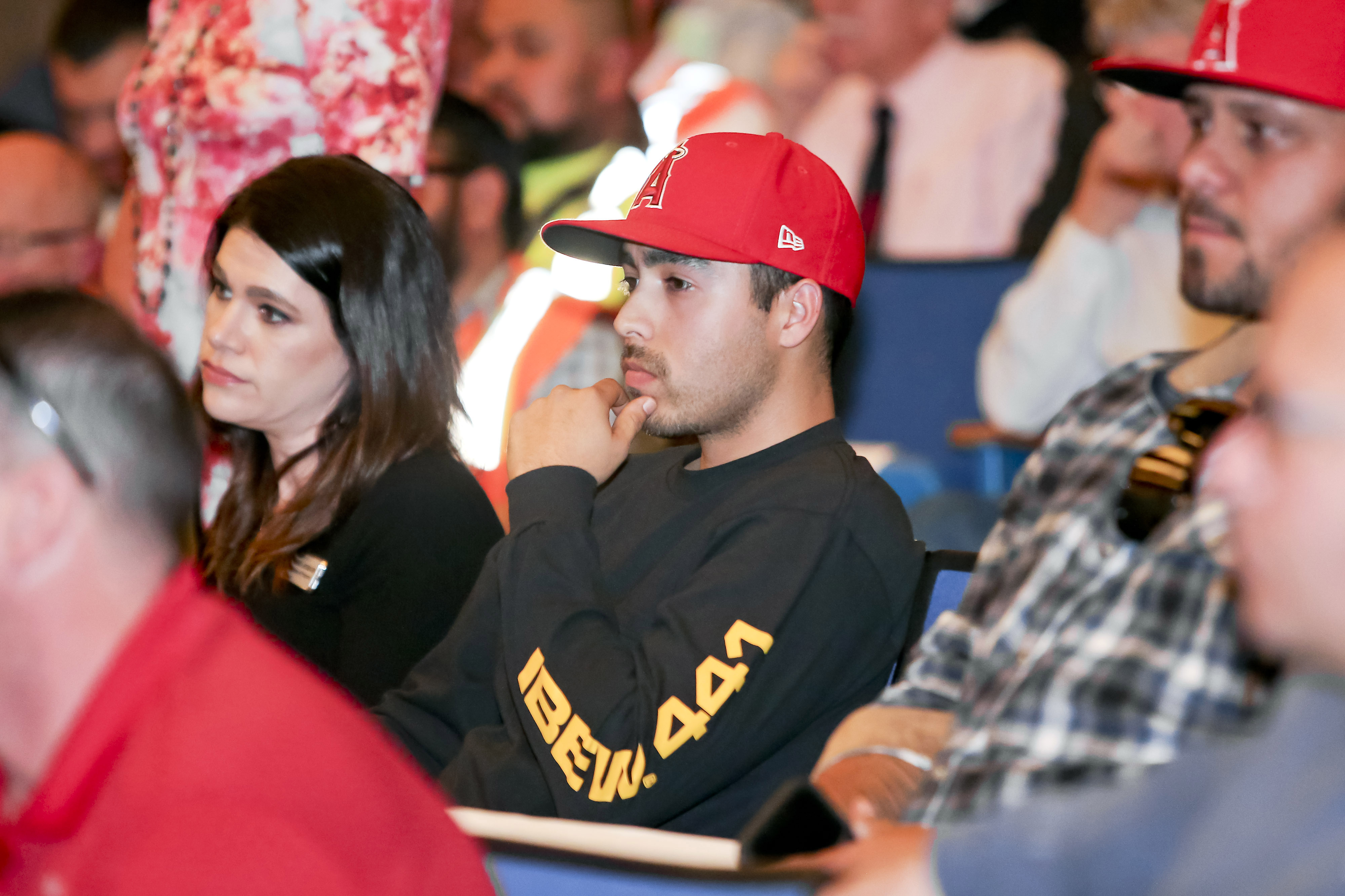 Antonio Barrios, 26, of Anaheim, a second-year apprentice with IBEW Local 441, said, “There wouldn’t be anything better than to get the opportunity to build and work in the same community that I was raised in.”

“The decision to buy the land has not been rushed,” said Angels President John Carpino. “Over the past nine years we have been involved in many discussions with various administrations about the stadium, the land and how to move forward in the best way possible which benefits the fans, the stadium and more important, the city. The one constant over the nine years of discussions has been keeping the Angels in Anaheim.”

“We take our role in the community very seriously,” said Angels Baseball chairman Dennis Kuhl. “We are looking to create a destination that will attract baseball fans, visitors and residents for decades to come.”