On May 2, the coalition turned in to the LA City Clerk about 30 percent more signatures than needed for the measure to qualify for the November 2022 ballot.

The measure needs a simple majority—50 percent plus one—to pass and become law.

United to House LA will raise millions of dollars and create about 4,400 new construction jobs each year.

“The housing crisis is one of the most urgent matters facing the city of LA. Our members want to play a part in solving this problem,” said LA/Orange Counties Building and Construction Trades Council Executive Secretary Chris Hannan said

A broad and diverse coalition of more than 130 local organizations, composed of the Building Trades, many other labor unions, homeless services providers, affordable housing developers, climate change activists and tenants’ rights groups, will reach out across LA in the coming months.

The initiative will impose a “luxury tax” on sales of property valued at more than $5 million. It affects very few properties—only about 3 percent of what sells each year—but because of the high dollar values, it will generate $875 million annually.

“This is really about millionaires and billionaires paying their fair share to help solve our housing crisis,” said campaign co-chair Laura Raymond, director of the Alliance for Community Transit-Los Angeles. 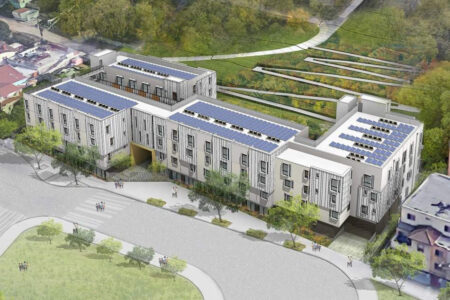 Of that money, 70 percent will go to construction, rehabilitation and preservation of affordable housing. Thirty percent will target legal aid and rental assistance to keep people in their homes, especially senior citizens and disabled residents.

Almost all the work will be under the Council’s Project Labor Agreement with the city’s Department of Public Works. Non-covered work will be paid at prevailing wage, and can become part of a PLA in the future.

The labor standards language is written into the measure, assuring that it will become law if the measure passes. 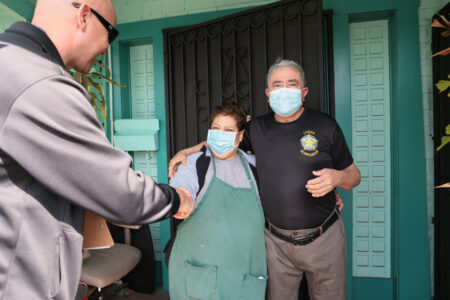 The Building Trades have already seen success with 2016’s Prop. HHH. That proposition raised $1.2 billion and will result in 7,718 new supportive housing units, most of them being built under a PLA.

“Our local unions are signing up more signatory contractors as a result of these housing measures,” Hannan said. “This construction is good for the people of LA and good for the Building Trades.”

“Our members are going to be relied upon to help deliver this housing, and we want to make sure that we’re delivering the housing with good local jobs and local careers for the community,” Hannan said.

The local affiliated unions played a huge role in the signature drive. They financed the collecting of almost half the signatures and sent out volunteers as well.

Jenise Dixon, a member of the Right to Counsel Coalition, said that United to House LA “will prevent people from becoming homeless in the first place.” Dixon, who rents her mid-city home, was able to enlist legal aid to fight being evicted.

The measure would provide this aid to tens of thousands of renters.

Jenise Dixon supports United to House LA because it will give tenants legal assistance to prevent eviction.

Preventing homelessness in the first place, by keeping people in the homes they love and the neighborhoods they know, is a big goal.

“I’ve been in my home 20 years,” Dixon said. “I don’t want to move—LA is one of the most expensive places in the country. It’s not easy to move.”

“We have specific language to open our doors to residents of the city of LA, residents who want a lifelong union career with great wages and benefits, to build our city.

“On behalf of our 140,000 members, we wholeheartedly endorse this measure.”

Learn more about the measure by visiting https://www.unitedtohousela.com.