LOS ANGELES—You might call justice and labor educator Mark McDermott a union historian. Or a walking champion for the working class. The popular speaker has a gift for bringing past victories to life to inspire constructive action for the future.

McDermott gave a presentation in September at the Los Angeles/Orange Counties Building and Construction Trades Council auditorium, following a talk the day before to Trades unions and students at Orange Coast College. Council Executive Secretary Ron Miller introduced McDermott by saying, “I think it’s important to understand our labor history, so we don’t repeat the bad, and so we can repeat the good.”

McDermott told the union audience that his mission is “to talk about how we fight to take back the American dream, so it becomes real again for working people.” McDermott, who started as a machinist and union organizer in Boston, vividly recounted several sit-ins and strikes from the past. 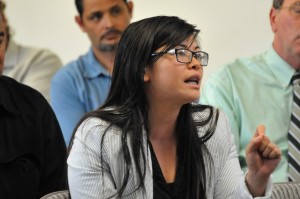 Miller said that what schools fail to teach, unions should. “Kids nowadays don’t get labor history in their classes, so it’s important that we give it to them.”

Sheet Metal Local 105 director of business development Jesse Ayala said that training programs could take up the charge. “Our apprentices need to be made aware that there was a fight to get what they have. When elections come around, they need to know how we achieved all these benefits and wages.”

McDermott sought to empower the representatives present by helping them communicate their cause better. “A majority of Americans still approve of unions and believe unions are necessary to protect workers’ rights,” he said. “So that’s the good news.”

He suggested audience members change their “elevator pitch,” or brief description of what they do. Instead of reciting long, confusing job titles, McDermott encouraged labor leaders to speak in clear, inspiring, personal language.

Ken Jenkins, Business Manager for UA Local 761 Plumbers & Fitters, agreed that communication is key. “I think people don’t know how to tell their story. But we need to spread that word.”

McDermott revealed a startling and hopeful statistic: Instead of growing hopeless about organized labor, polls show young Americans are more pro-union than their older counterparts. “They understand the American dream is getting stolen from them,” said McDermott. “They tell me, ‘We’re the people with three part-time jobs, with no health insurance or benefits, living at home with our parents.’”

McDermott said this spike in support for organized labor among young people may make the next generation more open to organizing. It may be the best way to protect their interests, ensure fairness and build a future.

Indeed, McDermott felt optimistic about organized labor’s prospects. “Don’t you feel proud of what our ancestors did? Doesn’t that give you a little more hope about what we can do now?”