After signing on with the Building Trades for a major project in Tarzana, the Cedars-Sinai health care organization is adding another at its flagship location in mid-city Los Angeles.

The new Seismic Upgrade Wing will be built under a Project Labor Agreement with the Los Angeles/Orange Counties Building and Construction Trades Council.

Council Executive Secretary Chris Hannan spoke in support of the project at a City Planning Commission hearing. “We represent the very best-trained men and women in construction,” he said. “The PLA will help Cedars-Sinai meet future seismic requirements for its entire campus, and will employ many Angelenos.”

The 24-acre campus occupies a prominent place in the Beverly Grove area. It is bordered by San Vicente Boulevard on the east, Robertson Boulevard to the west, Beverly Boulevard to the north and 3rd Street on the south side.

But several buildings do not meet the newest seismic requirements for hospitals. Under the Alfred E. Alquist Hospital Facilities Seismic Safety Act and subsequent amendments, hospitals must be able to remain fully operational after a major seismic event by 2030. 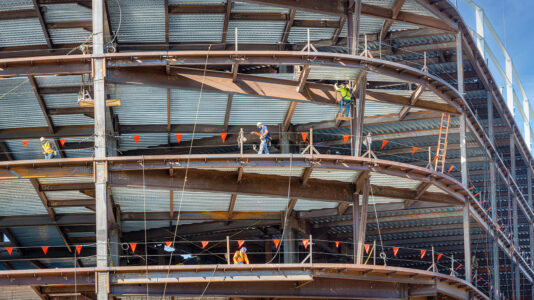 “The main hospital area is nearly 50 years old. It must be structurally retrofitted in order to operate past 2030,” explained Jeff Smith, MD, Chief Operating Officer of Cedars-Sinai.

During that time, it would be very difficult to treat the same number of patients that

those buildings currently see. Patient care would have to be cut, which hurts Cedars-Sinai’s mission of serving the community.

“A hospital is a machine, a 24/7 operation that just can’t be turned off,” Smith said. “We must maintain status as a Level 1 trauma center, for the most difficult trauma cases. Cedars-Sinai as a whole is a benefit for the public, especially during the Covid crisis.”

The answer is to demolish a small medical building and surface parking lot at the southwest corner of San Vicente and Beverly, and replace it with the new wing. Then, the retrofit will begin on the older buildings, at a more rapid timetable.

The new building will rise 176.5 feet, under the 185-foot height limit for the area, with an exterior of stone, masonry, aluminum, steel and glass. It will feature green roofs, terraced gardens and landscaped outdoor space. 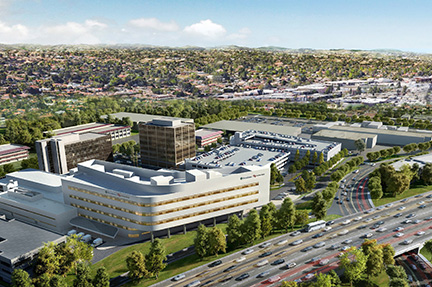 The remade Providence Cedars-Sinai Tarzana Medical Center will be complete in 2023.

There is no timetable yet for groundbreaking. With the Planning approval in hand, the project will move through the LA City Council. It is not subject to CEQA review, but it does require several amendments to the current Cedars-Sinai development plan.

Overall, the board commissioners were positive. “It’s a great project,” said commission member Dana Perlman. “They need to continue to expand.”

In addition, the “Reimagined Construction Project” is currently under way with a PLA at Providence Cedars-Sinai Tarzana Medical Center, with a $624 million budget.

The centerpiece will be the five-story Friese Family Patient Tower, featuring all-private rooms and sustainable, energy-efficient design. Other highlights include an updated and expanded emergency department, state-of-the-art technology upgrades and a healing green space. It will be complete in 2023.