SANTA ANA, Calif.—After almost a year of intense negotiation, the Los Angeles/Orange Counties Building and Construction Trades Council obtained a Project Labor Agreement with the Rancho Santiago Community College District that is expected to generate more than 2,000 jobs for local workers on up to $198 million worth of construction projects.

By a vote of 4-2, the district Board of Trustees March 24 approved the first PLA in a decade that the Building Trades have negotiated with a public agency in Orange County.
“It is a step forward to recover some Project Labor Agreements in Orange County,” said Jim Adams, Orange County representative for the Council.

Council Executive Secretary Ron Miller said jobs are the biggest coup for labor. “Orange County has had a high unemployment rate for a long time and this will help to put some of those folks back to work,” he said.

The agreement brings collective bargaining to work on projects funded under Measure Q, a bond measure that district voters approved in 2012. Both union and nonunion contractors can compete.

Richard Samaniego, Business Manager for International Brotherhood of Electrical Workers Local 441, said the agreement will see to it that prevailing wage laws are enforced “by using a local workforce and paying that workforce a living wage, and in turn those same workers can reinvest in this local community.” 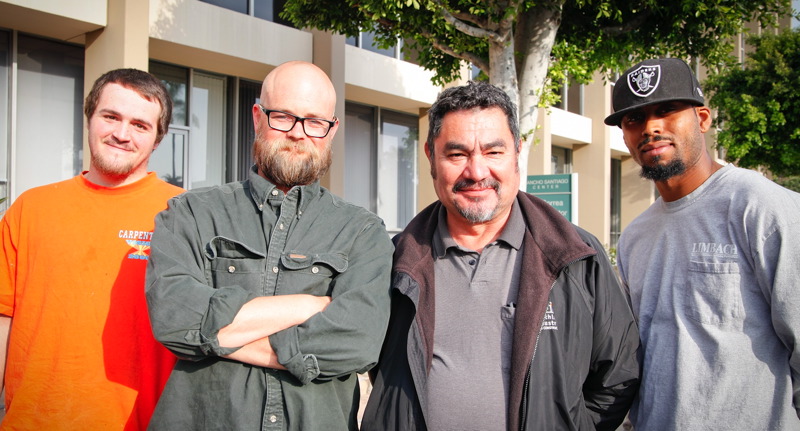 “The board members who voted for it saw the value of putting local community residents to work, and since they have a partnership with the Carpenters, Operating Engineers and Electricians, which have their apprenticeship classes at the campus, they see the advantage,” Miller said.

Board of Trustees President Jose Solorio, who voted in favor of the agreement, said he was pleased that it guarantees at least 66 percent of the construction workers will be hired from within Orange County, and at least half will live within the borders of the Rancho Santiago Community College District.

Miller said the high percentage of local hires was possible because of the popular joint labor-management training programs the unions maintain with the college district.
“These are long-time programs with a proven track record and a very high graduation rate,” Miller said. “They have been very successful at creating career paths for the local community.”

A Chance to Work in Our Community

Dwight Eads, 38, is an Iron Workers Local 433 apprentice enrolled at Santa Ana Community College who expects to get training hours on Measure Q projects. The resident of Orange said his other training was obtained at work sites in Los Angeles and Indio. “It is a chance to work in my community,” he said. “This will mean a lot to me.”

“I’m proud we are building new classrooms and facilities at Santa Ana College, but I’m just as proud that the majority of construction work will be performed by our local residents,” Solorio said after the vote. He estimated that the agreement will create 2,880 jobs.