This has been a challenging time since the Coronavirus pandemic struck. Our jobsite safety standards, already strict, have gotten even tougher. That’s helping to limit exposure to the virus among union members and their families. And we hope that paves the way to reopen all of society—to meet again at the parade on Monday, Sept. 6, 2021. 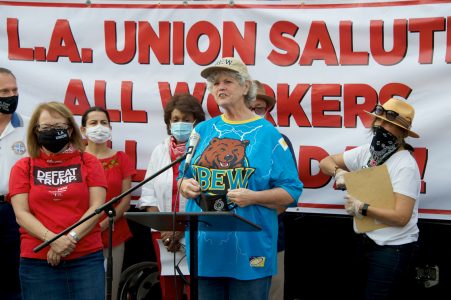 We’re essential workers and we’re proving it every day.

Over a lifetime, union workers are making 16 percent more than the non-union. Every year of their careers, from start date to retirement. That’s what our activism gets us. 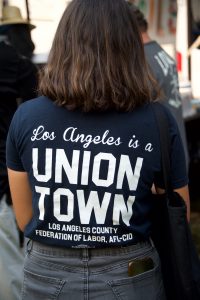 This union member shows off her solidarity.

You’d think with this clear advantage, people would be lining up to get in a union. And they are—half of non-union workers say they’d join a union in a heartbeat.

But there simply aren’t enough union jobs for all the people who want them.

In the 1950s, union membership was 35 percent. In 1983, 20.1 percent of workers were in unions. It’s declined every year since then. Major industries left the United States for a better deal for them offshore, one that takes advantage of cheap labor, substandard working conditions and no environmental standards.

I’d say we’ve bottomed out, so let’s reverse this trend and get those numbers up.

The fields where jobs have grown, such as food service, have historically had very low union membership. Today, less than 2 percent of restaurant workers are in a union. There are plenty of reasons they’re not in unions. The laws in this country protecting workers’ rights to form unions are weak.  Some voters are prejudiced against unions. And they in turn elect lawmakers who don’t care about working people.

We’re seeing the sad results of this cut in union density. In the past 30 years, much 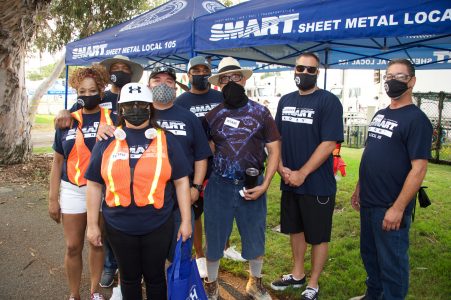 more wealth has gone to a small number of people in our society than to the majority of working people. The federal minimum wage hasn’t been raised since 2009.

Yes, that 16 percent difference in pay for union vs. non-union really adds up. Thousands

of dollars, over several decades. And along with that higher pay comes high-quality, secure health insurance, and a pension too.