Building Trades Orange County Representative Ernesto Medrano, who lives in Anaheim, looked at the crowds gathered for the ribbon-cutting and said, “It’s an important day here. This enhances our track record that we’re a skilled, trained workforce with apprenticeships that can build a state-of-the-art facility on time and on budget.”

Medrano noted that all the Trades were involved, and the PLA included local hire. “We look forward to more big buildings in Anaheim and Orange County.”

Turner Construction senior vice president Rory DeJohn said the local affiliated unions of the Building Trades rose to a serious challenge. “This building is state of the art. If you came here in February, you’d have questioned how we were going to make it. But we made a commitment to the city that we would finish, and we did. And we’re proud of that.” 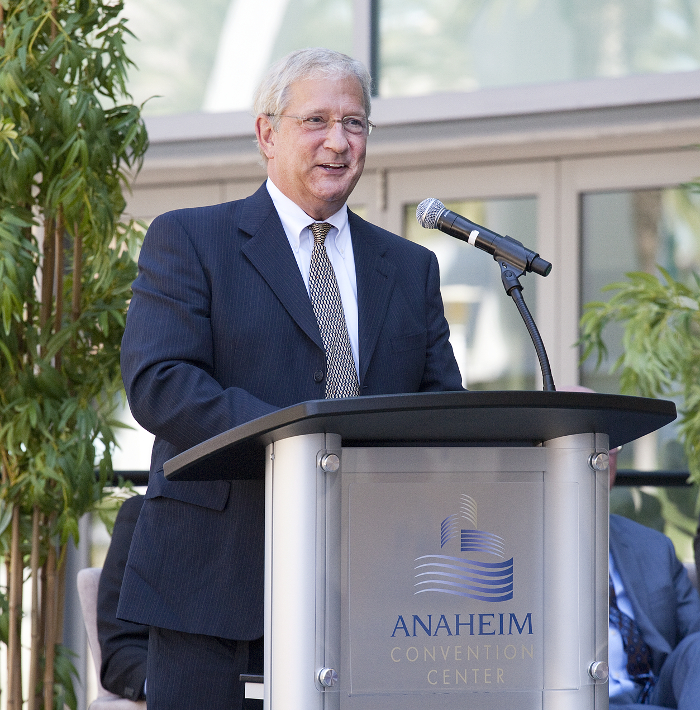 Anaheim City Council Member Lucille Kring agreed. “To everyone who worked so diligently and had a hand in this beautiful building, thank you.”

Founder and senior principal architect for Populous Todd Voth told “Building Trades News” that the Building Trades deserve full credit. “We always appreciate what they do. You look at the details and you’ll see their skill and training. We have high standards, and what they do is amazing.”

IBEW Local 441 Business Manager Richard Samaniego said the PLA was invaluable. “This is the first of many PLAs the Trades have negotiated. We have many more promising projects coming up. For us, a PLA is about hiring local people who can reinvest in their own community. That’s how you move the economy.”

UA Plumbers Local 582 Business Manager Anthony Novello said his members love a good challenge. “We had two big contractors out here. So it was a huge job for us. And our guys did a phenomenal job. The plumbing and mechanical systems are cutting edge.”

Roofers & Waterproofers Local 220 Business Manager Brent Beasley also credited the PLA. “It enabled them to get the project done on time and on budget, with a skilled and trained workforce.”

SMART Local 105 representative Sam Hurtado said Trades workers can handle anything. “When you’re faced with unusual circumstances, experience helps you find solutions. That’s why, on a complex build like this, you use union contractors who can bring in the top workers in the industry.”

Operating Engineers Local 12 representative Thomas Drennan cited the hard work of local union representatives over many years for making the project a success. “It was a long process to get the PLA. It was hard fought by both the Trades and the Anaheim City Council. And we hope to continue that success.”

Construction on ACC North, its seventh expansion or upgrade since the original $14.7 million facility opened in 1967, officially launched April 21, 2015, with an excavator biting into a two-story chunk of old parking structure.

Former Councilmember Jordan Brandman said creating good jobs boosts the economy. “It’s a great day for Anaheim residents and businesses, and most importantly, for the workers in Anaheim and Orange County who built this project, and those who’ll work here. I’m touched and honored to be among my brothers and sisters in the Trades to celebrate this fantastic day.”

Anaheim Mayor Pro Tem James Vanderbilt echoed the sentiment. “My dad worked construction, so I appreciate all that went into this building. I’d like to thank the nearly 2,000 men and women who made this building happen for their hard work.”

The building boasts 1,400 panes of glass, 13 million pounds of steel, and 33,000 yards of concrete, enough to create 3.5 Mount Everests. And 140 miles of electrical cable plug everything in.

Jay Burress, President and CEO of Visit Anaheim, said the Building Trades had shown their worth. “The various unions always have someone on call on tight deadlines. It’s because of their support that we were ready for our first client this coming Friday.”

Anaheim will collect $9 million more in new annual tax revenue and enjoy 2,000 permanent restaurant, hotel and other jobs, and new bookings are pouring in for conventions.

ACC North’s two 25-feet-high interior levels hold 22,000 people. Its 200,000 square feet of flexible space boost the ACC’s total square footage to 1.8 million. And for the first time, over a million of those can support exhibitions, making the ACC one of just 11 U.S. convention centers in the industry’s elite “million-square-foot club.”

With ACC North, the ACC’s number of meeting rooms climbs to 99, and parking spots nearly double to 3,000.

As white and gold ribbons were cut, Cement Masons Local 500 business agent Tony Gianquinto said the work speaks for itself. “To say I’m impressed with all the Trades on this job, not just the masons, is an understatement. What they’ve done is a tribute to their skills and work ethic. The sheer beauty of it is a tribute to all the Trades workers who put it together, and to union labor overall.”

To stay up-to-date with “Building Trades News” magazine, subscribe by contacting us here.