Union approval in the United States is at its highest level in more than 50 years. A new Gallup poll says 68 percent of Americans approve of labor unions, and that’s the most since 71 percent in 1965.

In the years between 1965 and 2021, our unions and our country have gone through many changes. But support for unions remains steadfast. In fact, positive attitudes toward unions, and the desire to join a union, have been going up at an even higher rate in the last decade. 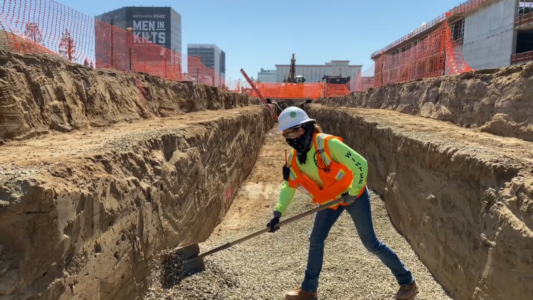 Talk to your friends and neighbors about the work you do as a union member.

The number of non-union workers who say they’d like to be in a union is at a high level: 48 percent would join if they could.

In light of all that support, you’d think that union membership is high in our country. But it’s the opposite. Only about 11 percent of workers are in a union.

A Voice on the Job

For every worker who’s in a union, there are four more who would like to be.
In our “lopsided” recovery from the Great Recession, some workers have done well in union-organized middle-class careers. But many more Americans have been trying, and failing, to scrape out a living. They’re turning to unions to improve their lives as working people, with better pay, safer working conditions, a voice on the job and a more secure retirement.

“The Building Trades workforce is a large, diverse cross-section of all Californians.”

But the road map to a union is extremely unclear for these millions of American workers.
Our country’s labor laws don’t make it easy. The National Labor Relations Board oversees union organizing, and every time an anti-worker President make it into office, one of the first things they do is to gut the NLRB. A President can get rid of NLRB members who respect labor and replace them with anti-worker zealots.

The same goes for Cabinet positions like Secretary of Labor. And Presidents can decide whether or not to use Project Labor Agreements on federal work.

Protect the Right to Organize

Too many union organizing rights are connected to the ups and downs of the federal government, and the law that governs this needs to change. So, the Building Trades support the Protecting the Right to Organize Act. 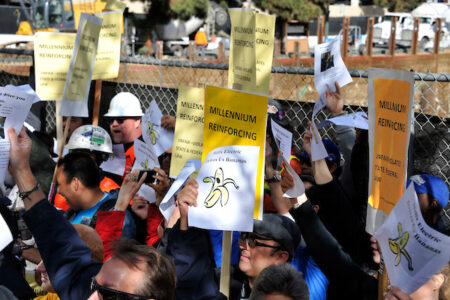 Unions that rally together, stay together.

The PRO Act will make it easier for workers to organize without retaliation from employers, and harder for temporary appointees to stop organizing drives. Before you vote for anyone running for US Congress or Senate, ask them: Do you support the PRO Act?
The Building Trades workforce is large, diverse, and a true cross-section of all Californians. Building Trades members and their families live in every district and city in LA and Orange Counties. We constantly educate our legislators that we are their neighbors and their voters.

Each union member can be involved in these big political strategies, through being active in his or her union. Members can join committees, go to rallies and pickets, volunteer, and testify at a City Council or school board hearing. And there’s something else you can do: Organize your neighbor. And your friends. And your family.

We are fortunate to be Building Trades union members. We worked hard to get into our unions, and we work hard on the job. But we don’t have to struggle, as millions of American workers do, even to organize a union. We don’t have to worry that we’ll get fired or cheated because we talk about unionizing. We have a union.
The best thing we can do with this valuable position is make it possible for more people to join.

Talk with Co-workers, Friends and Neighbors

Ask yourself if you know other people in construction trades who are working non-union. Chances are, you do. 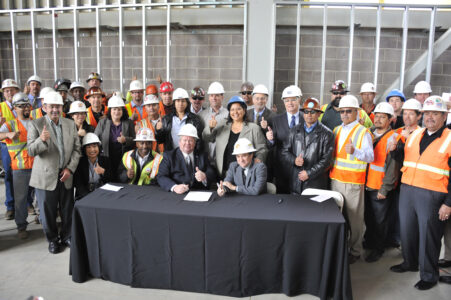 Board members, staff and the Building Trades sign a PLA for LA Unified School District, covering billions of dollars in work.

The best way to find out is by talking about it. Start by wearing your local’s T-shirt when you’re out doing errands or at your kids’ games. Mention your work on your Facebook page. You could lend them your local’s newsletter or “Building Trades News,” so they can see what the Council and its affiliated local unions do.

Talk with them about the benefits of becoming a union member. Ask them about training and health care, or the last time they had a raise. How about their plans for retirement? What happens if their company closes or slows down?

Tell them about the pride and camaraderie of being a union member. Introduce them to your local’s organizer or business representative. Take them on a tour of your union’s apprenticeship training center. Lend a hand.

Be a union brother or sister, and be a good neighbor. We can all be union organizers.